Multiple Uses Of Stimulating The Vagus Nerve With CES
info@zenofsleep.com Note: The Zen of Sleep  does not make claims as to alleviation of pain. However this article shows how inflammation and symptoms of arthritis may be reduced by Vagus nerve stimulation. The CES MAX targets the Vagus nerve by treatment on the Tragus. CES units have been used for Vagus nerve stimulation for decades, through the use of ear clips to stimulate the nerve endings in the ears.

The CES MAX 2 cranial electrotherapy stimulator device incorporates the use of ELF applied by ear clip attachments electrodes, to stimulate the Vagus nerve.

Stimulating the vagus nerve reduces inflammation and the symptoms of arthritis. 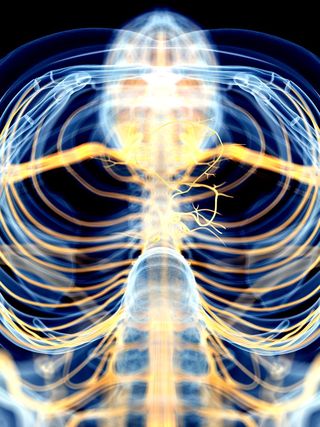 Inflammatory responses play a central role in the development and persistence of many diseases and can lead to debilitating chronic pain. In many cases, inflammation is your body's response to stress. Therefore, reducing "fight-or-flight" responses in the nervous system and lowering biological markers for stress can also reduce inflammation.

The vagus nerve is known as the "wandering nerve" because it has multiple branches that diverge from two thick stems rooted in the cerebellum and brainstem that wander to the lowest viscera of your abdomen touching your heart and most major organs along the way. Vagus means "wandering" in Latin. The words vagabond, vague, and vagrant are all derived from the same Latin root.

In 1921, a German physiologist named Otto Loewi discovered that stimulating the vagus nerve caused a reduction in heart rate by triggering the release of a substance he coined Vagusstoff (German for "Vagus Substance”). The “vagus substance” was later identified as acetylcholine and became the first neurotransmitter ever identified by scientists.

Vagusstoff (acetylcholine) is like a tranquilizer that you can self-administer simply by taking a few deep breaths with long exhales. Consciously tapping into the power of your vagus nerve can create a state of inner-calm while taming your inflammation reflex.

A 2010 study, “How Positive Emotions Build Physical Health: Perceived Positive Social Connections Account for the Upward Spiral Between Positive Emotions and Vagal Tone,” was published in Psychological Science. For this research, Barbara Fredrickson and Bethany Kok of the University of North Carolina at Chapel Hill honed in on the vagus nerve and discovered that a high vagal tone index was part of a feedback loop between positive emotions, physical health, and positive social connections.

Their research suggests that positive emotions, robust social connections, and physical health influence one another in a self-sustaining upward spiral dynamic and feedback loop that scientists are just beginning to understand.

In 2014, I wrote a Psychology Today blog post, “How Does the Vagus Nerve Convey Gut Instincts to the Brain?" based on findings by researchers in Switzerland who identified how the vagus nerve conveys “gut feelings” of anxiety and fear to the brain. Clinical and experimental studies indicate that stress and depression are associated with the up-regulation of the immune system, including increased production of pro-inflammatory cytokines.

When administered to patients or laboratory animals, cytokines have been found to induce typical symptoms of depression. Therefore some cases of low mood, low energy, and lack of motivation may be due to elevated levels of cytokine proteins. 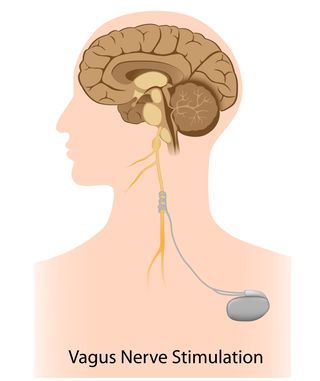 Recently, an international team of researchers from Amsterdam and the United States conducted a clinical trial which demonstrates that stimulating the vagus nerve with a small implanted device significantly reduced inflammation and improved outcomes for patients with rheumatoid arthritis by inhibiting cytokine production.

RA is a chronic inflammatory disease that affects approximately 1.3 million people in the United States and costs tens of billions of dollars to treat each year, according to the researchers.

The neuroscientists and immunology experts involved in this study used state-of-the-art technology to map the neural circuitry that regulates inflammation. In one circuit—termed “the inflammatory reflex”—action potentials transmitted in the vagus nerve inhibit the production of pro-inflammatory cytokines.

The July 2016 study, "Vagus Nerve Stimulation Inhibits Cytokine Production and Attenuates Disease Severity in Rheumatoid Arthritis," appears online in the Proceedings of the National Academy of Sciences (PNAS) and will be published in an upcoming print issue.

This is the first human study designed to reduce symptoms of rheumatoid arthritis by stimulating the vagus nerve with a small implanted device which triggered a chain reaction that reduced cytokine levels and inflammation. Although this study focused on rheumatoid arthritis, the trial's results may have implications for patients suffering from other inflammatory diseases, including Parkinson's, Crohn’s, and Alzheimer's.

In a statement, Paul-Peter Tak, the international principal investigator and lead author of the paper from the Division of Clinical Immunology & Rheumatology of the Academic Medical Center at the University of Amsterdam, said,

These findings suggest a new approach to fighting diseases that are currently treated with relatively expensive drugs that have a host of side effects. VNS gives healthcare providers a potentially more effective way to improve the lives of people suffering from chronic inflammatory diseases.

Conclusion: VNS Is a Potent Drug-Free Alternative for Treating Inflammation

In conclusion, co-author Kevin J. Tracey, president and CEO of the Feinstein Institute for Medical Research and the person who discovered the inflammatory reflex, said,

"This is a real breakthrough in our ability to help people suffering from inflammatory diseases. While we've previously studied animal models of inflammation, until now we had no proof that electrical stimulation of the vagus nerve can indeed inhibit cytokine production and reduce disease severity in humans. I believe this study will change the way we see modern medicine, helping us understand that our nerves can, with a little help, make the drugs that we need to help our body heal itself."

The emerging field of bioelectronic integrative medicine targets a variety of disorders traditionally treated with pharmaceuticals by using advanced neuromodulation devices. Stimulating the vagus nerve offers significant advantages to the use of drugs—such as lower cost and fewer side effects.

News and information to help you sleep and live a better healthier life. Sign up below.

ENTER YOUR EMAIL TO RECEIVE A 5% COUPON CODE IMMEDIATELY

As Seen On NewsWatch TV